You’ve probably heard the riddle about the injured child and his doctor. It goes like this:

“A father and son are in a horrible car crash that kills the dad. The son is rushed to the hospital; just as he’s about to go under the knife, the surgeon says, “I can’t operate—that boy is my son!” Explain.”

If you paused at all before guessing that the doctor might be the boy’s mother, you’ve revealed a stereotype that many of us hold. When asked to imagine a doctor, many of us picture a man.

Diversity in the medical profession is vital, because patient communities are diverse. This is not to say that rich white male doctors can never treat patients different than themselves effectively and with compassion. But we know that research on women’s health lags far behind research on men’s health, that there are persistent disparities in medical care based on race and socioeconomic status, that racial empathy gaps plague our assessments of each other’s pain, and that doctors often judge their patients based on factors that may or may not actually be relevant to their medical condition. Increasing diversity of all sorts among doctors would not only directly benefit patients but also improve the medical field as a whole.

Which is why I was sad to see this advertisement in the Gainesville Airport the other day (sorry for the bad image quality): 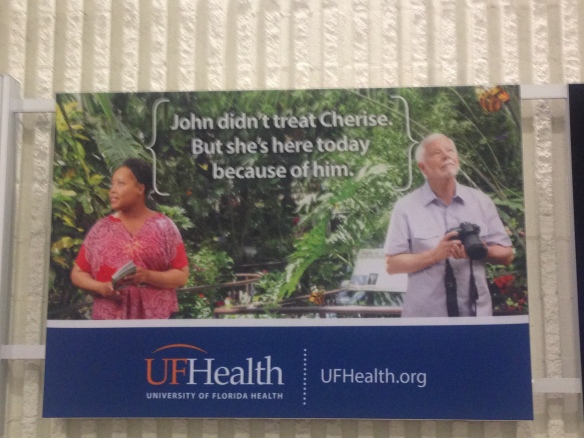 To “get” this ad, you have to realise that John, the older white man on the right, is a doctor and/or a medical researcher, and Cherise, the African-American lady on the left, is the patient who’s alive because of him. On its own, I guess this ad isn’t too terrible, and I do like the sentiment of doctor and patient sharing this lovely town side by side. But when the two other ads in the series look like this, you begin to wonder about whether they welcome into the medical profession anyone who will not grow up to be a white man. 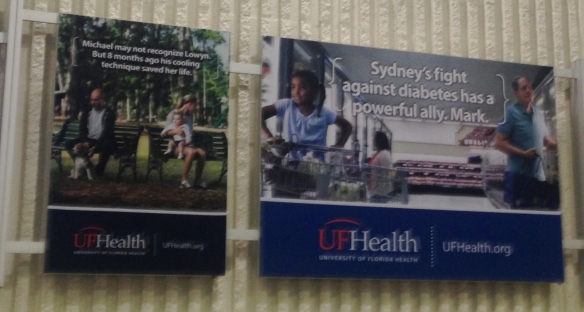 I suspect that at least a few people may look at these ads and continue to believe, either explicitly or implicitly, that saving lives is the exclusive domain of white men, and that’s a shame.

UPDATE: I failed to mention explicitly how, in addition to the doctors all being white men, the patients are all women and two of the three are women of colour (thanks to my friend Holly for emphasizing this point to me). Casting women as needing to be saved by men is an old patriarchal trope that rears its ugly head everywhere from fairytales to sexual assault trials. To see it portrayed here so blatantly makes these ads doubly disheartening. And then I realised, wouldn’t these ads be SO much better if we couldn’t tell who the patient is and who the doctor is?