On the trail that led me to become an evolutionary biologist, there’s a crucial section of terrain that could be labelled “Richard Dawkins.” As a teenager, I was all set on becoming a microbiologist of some sort, or maybe even a doctor. Our syllabus for the 11th and 12th standard exams in India included a chapter on natural selection, but I doubt that would have been captivating enough to sway me. But then I was lucky enough to interact with an evolutionary ecologist (doing fieldwork on my school campus). Thanks to some deal struck between him and our wonderful biology teacher, he became responsible for guiding us through year-long projects that exposed us to evolutionary and ecological thinking. Conducting that project may well have made me change course away from medicine. But the event that definitely set me onto the evolutionary biology trail was when he recommended that I read Richard Dawkins’ Selfish Gene.

And then in the year after school, as I flailed a little academically, I spent all my time reading Dawkins’ Extended Phenotype in conjunction with James Gleick’s Chaos, trying to reconcile the two views of nature that these books detailed. This whole process of taking ideas seriously and following them to their logical conclusions was so much fun, and writing an essay about these two books probably helped me get into Amherst College. So I owe a lot of my intellectual development and life trajectory, both directly and indirectly, to Dawkins. Of course, I’ve now learnt to think a bit more critically, and see some of the limitations of the scientific discussions in his books. But it always upsets me a little bit when my colleagues in academia bash Dawkins in totality instead of calling out his specific problematic words or actions (of which there are many). By failing to acknowledge the value of his clearly written, easily available introductions to not just evolutionary biology but also scientific thinking, blanket-Dawkins-bashers make me feel like my path into this field is somehow lesser. It isn’t, and I’m really glad that seventeen year old me didn’t hear too many academics’ opinions about Dawkins.

But I’m even more glad that seventeen year old me didn’t hear Dawkins himself. Over the years, I’ve learnt to expect toxic Islamophobia from him, and a strange blend of progressiveness and anti-feminism. With each outrageous statement, the idea of having heroes takes another hit, but I still remember the role his work has had in my life. Whenever academics use his tweets as a chance to decry Dawkins, I think about writing exactly this post—a plea to separate the man’s current words from his past ones. But when Dawkins, who claims to stand for science above all else, uses his exceptionally wide-reaching platform to bully a fourteen year old Muslim boy for his passion for science, he undermines his own mission irrevocably. 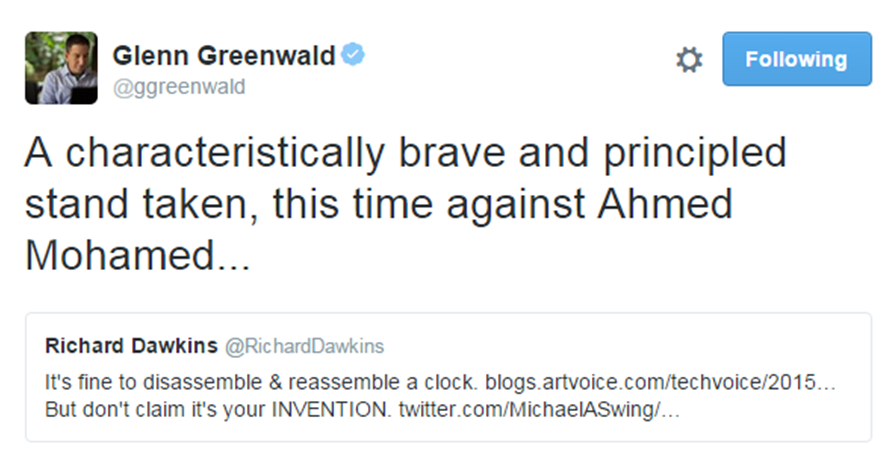 So thank you, Richard Dawkins—I wouldn’t have become who I am today without your work. But please realize that your real contribution to the world lies in inspiring, not shutting down, scientific curiosity in all children everywhere. And fellow academics, it’s our job to welcome students of all sorts into science, no matter how they get there. Sometimes that route involves tinkering with electronics, other times it involves being inspired by the science writing of someone who turns out to be a bigot.

5 thoughts on “The Heartbreak of Watching Richard Dawkins Implode”