You may have seen this recent profile of my Ph.D. advisor, Jonathan Losos. If you scan the quotes, most from his former grad students and postdocs, you can tell that many of us like and admire him quite a bit. There’s a line from me in there, but I wrote a lot more for the interview that didn’t make it into the piece, and there are parts I want to share (edited from original quite a bit; thanks Elizabeth Pennisi for asking thought-provoking questions!).

Specifically, I’m writing this post as part of my Doing the Work series (see parts one and two here) because what Jonathan and I learnt in our interactions was how to disagree well about difficult things, which is a key component of shifting academic culture towards equity and justice. None of what I write here is to suggest that Jonathan is perfect in this realm. Far from it. Indeed, the most revealing moments were moments of imperfection, and by talking about them I hope to illustrate that “getting things perfect” is mostly irrelevant for making culture change in academia. I hope that white professors who lead diverse labs and research groups (and all the rest of us too, of course) will use this piece as a way to reflect a bit—honestly, and with a mind and heart oriented towards growth and not self-congratulation—on how you show up for your people.

(What made you decide to join the Losos lab?)

My decision to join the Losos lab was made easy because I had a great feeling about it. Part of this great feeling came from the fact that the lab was racially diverse and included many women scientists. During my visit, I had a pretty frank conversation about racial dynamics in the department with the lab’s grad students, and I was encouraged that there were folks willing to speak openly and honestly.

One thing I remember from when I visited the lab after being offered a place in it gives a nice insight into the kind of person Jonathan is. I visited along with another future grad student, and Jonathan had planned to give us each a copy of his 2009 book on anoles. But I had already bought and read his book, and it would have been silly for him to give me another one. So the next day, just before I left, he coordinated with the grad student we were staying with to come over with a different gift—a stuffed toy anole (you should ask him why he had a box of 50 of these in his office, it’s a great and ridiculous story). He didn’t want me to go home empty handed or feel less valued than the other prospective grad student, and I noticed and really appreciated this gesture of care and consideration (and the other student got their stuffed toy anole when they joined the lab in the fall, I’m pretty sure). I was 95% sure I wanted to join the lab before that, but that sealed the deal.

(What challenges did you, he or the lab face while you were there?)

In the second year of my Ph.D., I started to feel like I wasn’t getting enough guidance. Jonathan was traveling a lot that semester, which probably contributed to it, and I had my qualifying exams coming up, and so was nervous. I remember building up the nerve to have a phone conversation with him in which I told him I needed more advising from him, more concrete advice. He was slightly taken aback, I think. But from our very next meeting, he changed how he showed up to our meetings. He was more present, more proactive. I learned that I could ask him for things I needed, and he would do his best. I think I learnt how to have difficult conversations in a healthy and respectful way from my interactions with Jonathan, which has turned out to be an invaluable life skill.

Another place in which we struggled in the lab was with the culture of our lab meetings. I’m not sure everyone in the lab felt this way, but there was a period in which I found lab meetings to be sort of hostile, and difficult to ask questions in. Not too many of us talked. And there were definitely times when Jonathan was part of the problem, contributing to the creation of hostility. But a bit later, after some turnover in personnel and when Jonathan was on sabbatical, a couple of us who remained made a proactive effort to turn things around, to be friendlier and more relaxed. To Jonathan’s credit, he was completely accepting of this changed culture that he encountered on his return.

I also think the lab faced challenges surrounding creating a welcoming environment for people from different backgrounds. The lab was remarkably diverse for our field, especially for herpetology, especially for a lab headed by a white man at a place like Harvard, which institutionally has, at best, only a surface level commitment to diversity. And we certainly had challenging moments in the lab around this—comments were made that would have been par for the course if the lab were an “old boys’ club” but that weren’t acceptable to many of us. And again, there were certainly moments in which Jonathan was part of the problem.

Would it have been better if these sorts of comments had never been made, if the culture had been different right from the start? Of course, but that wasn’t the reality. Change can only happen if we first accept the place that we are in. Jonathan and I began having explicit conversations about diversity in the lab in my third year in grad school, and I was so surprised at how he was always open to listening to my views, always open to learning. I came to understand that no matter how much our opinions diverged, no matter how uncomfortable I made him feel, he wouldn’t lose respect for me. To be able to learn how to speak truth to power in this relatively safe, relatively sheltered context was tremendously important to me. And equally, Jonathan was supportive of my activism outside of lab, my public outreach in the form of writing. He never told me, as so many advisors tell their students, to just focus on the science, even when I challenged other powerful people in the department and in the field. He’d sometimes advise me against speaking up in particular contexts, but always also reminded me that, ultimately, I could make my own decisions about how to use my voice. I was confident I wouldn’t face repercussions from him for being true to myself. Being able to reassure students who have come after me of this has, I hope, made a difference to their relationships with Jonathan too, and of course they know they have an ally in me always—in this way, the work is made communal. Jonathan made it a point to mention my activism as an achievement when introducing me publicly at my Ph.D defence, which, I think, speaks volumes.

(How do you feel about your time in that lab?)

I loved my time in the Losos lab. Which isn’t to say that I didn’t struggle, or even that I was happy in grad school. I faced mental health challenges that were exacerbated by departmental and institutional culture, and by the capitalist culture of academia itself. I have since learnt  that an environment in which people feel safety, connection, and agency is an environment in which they can bring forth their most creative selves (I learnt this from Joyce Dorado at UCSF; I’m in the process of building a mentoring framework that is trauma-informed for my own lab, stay tuned for more!). I am tremendously lucky that I felt safety, connection, and agency in the Losos lab, and it makes me so sad to recognize that the combination of safety, connection, and agency is rare in academic workplaces. I don’t think individual people have the power to change the course of science except insofar as they nurture a scientific community, and it really helps when that community is founded on kindness and generosity, on unconditional respect for one another’s humanity across lines of power, identity, and privilege. There’s quite a bit that I intend to do differently from Jonathan as a PI, but in this way, I hope to emulate him always. 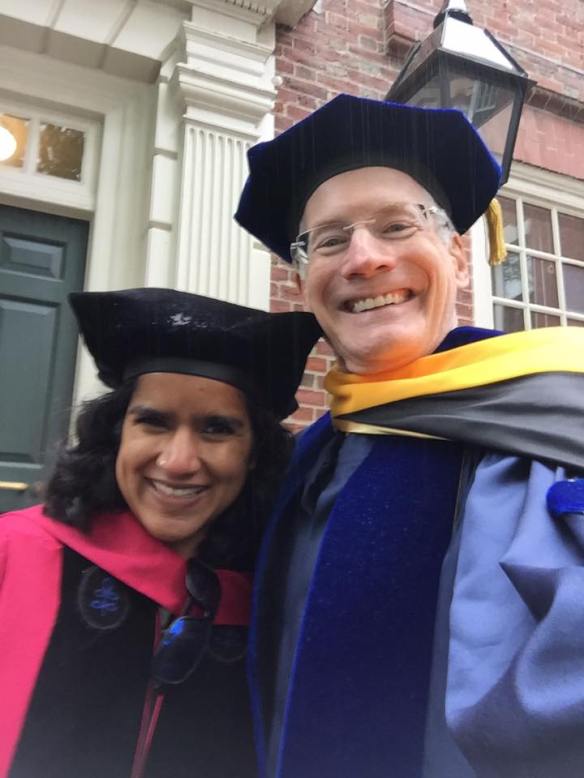 Jonathan and me at my Ph.D. graduation. You can read about how he made me go to this event here.